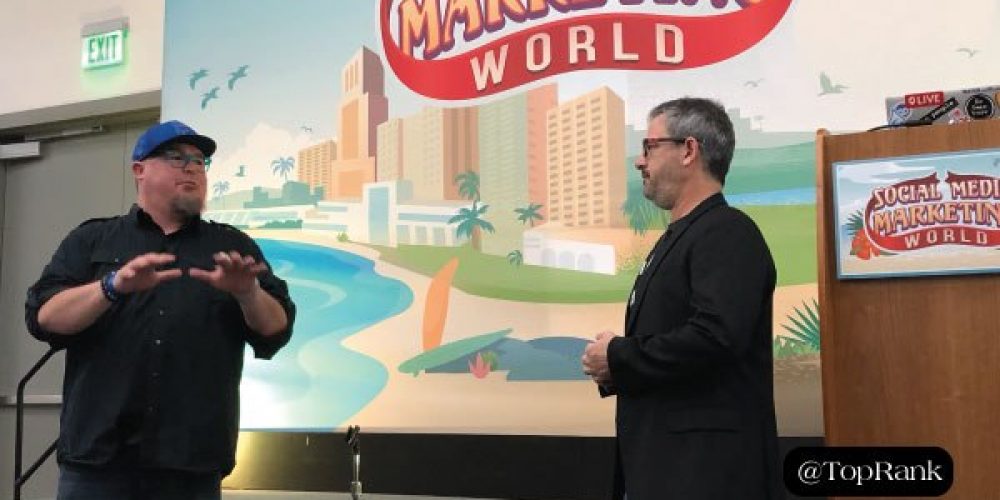 Everyone has that one family member that invested in Bitcoin (or another cryptocurrency) – without knowing anything about it.

For my family, that person was my brother.

Before he invested in Bitcoin, he probably should have come with me to Joel Comm and Travis Wright’s Social Media Marketing World session on blockchain and cryptocurrency. That way he would understand the real value and potential of this new technology, instead of just blindly jumping on a hot investment trend.

One thing’s for sure after hearing from Joel and Travis – blockchain and cryptocurrency will revolutionize much of the world today, including marketing. Read on to learn why that is.

The World Is Ripe for Disruption

“Everything changes, nothing stays the same,” Joel said, using examples of disruption to prove his statement.

Since the 1950s, we’ve gone from computer mainframes that were the size of whole rooms to the Internet of Things. We’ve gone from Blockbuster to Netflix. Nokia to iPhone. Barnes & Noble to Amazon.

The Value of Blockchain & Cryptocurrency

Before we can understand blockchain and why we need to care about it, we first need to understand what it is and why it’s such a big deal.

Cryptocurrency, on the other hand, has a limited supply and is decentralized. For Bitcoin specifically, there are only 21 million of them in existence. And there will never be any more. Bitcoin owners don’t have to worry about the value of their coins decreasing because more are produced.

Bitcoin will also revolutionize payments. There are no more transfer fees because your wire has to go through several different banks. Instead, it’s pier-to-pier (P2P) and instantaneous.

Here’s where the real value of cryptocurrency is seen. The blockchain is a distributed, decentralized, public ledger that records each and every transaction. This ledger cannot be edited or altered – it is immutable.

As Travis so eloquently put it, “You can’t cook the books with blockchain.”

Blockchain is honest and transparent. Two qualities that aren’t often associated with finance.

“Blockchain is the single most disruptive technology in our lifetime,” Joel added.

Why Marketer’s Need to Care

For me, the aha moment during Joel and Travis’ session came when Travis said, “Blockchain is just a database you can trust. Without question.”

With all of the controversy surrounding data usage, management, and privacy today, this is why marketer’s need to care. Any business that could benefit from credible, trustworthy, unhackable data should be looking into leveraging blockchain technology.

In addition, our big internet giants (i.e. Facebook, Google, Amazon) are all looking into creating their own blockchains and marketers need to take note as it might impact your advertising, reach, or engagement on these platforms.

We’re in business to make money. The impact of cryptocurrency is coming and will span economies, markets, industries, businesses, and our wallets. To adapt, marketers need to take a close look at blockchain technology and see where it can add value to their business, strategies, or products.