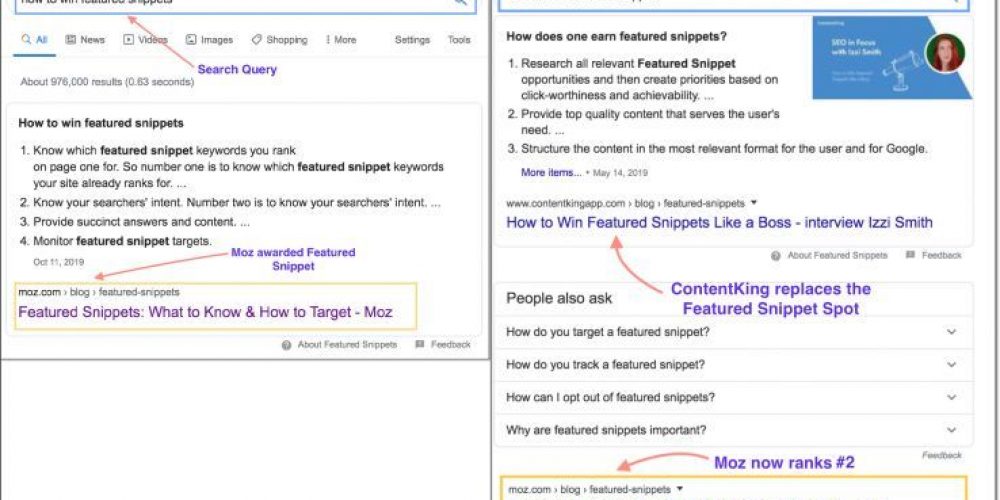 All that changed in January when Google announced they would de-duplicate search results to show the featured snippet URL only once on the first page of results. No more double-dips.

Here’s how we found the answer.

Working with the team at SearchPilot, we devised an A/B split test experiment to remove Moz Blog posts from Google featured snippets, and measure the impact on traffic.

Using Google’s data-nosnippet tag, we identified blog pages with winning featured snippets and applied the tag to the main content of the page.

Our working hypothesis was that these pages would lose their featured snippets and return to the “regular” search results below. A majority of us also expected to see a negative impact on traffic, but wanted to measure exactly how much, and identify whether the featured snippets would return after we removed the tag.

In this example, Moz lost the featured snippet almost immediately. The snippet was instead awarded to ContentKing and Moz returned to the top “natural” position.

Here is another example of what happened in search results. After launching the test, the featured snippet was awarded to Backlinko and we returned to the top of the natural results.

After adding the data-nosnippet tag, our variant URLs quickly lost their featured snippets.

How did this impact traffic? Instead of gaining traffic by opting-out of featured snippets, we found we actually lost a significant amount of traffic quite quickly.

Overall, we measured an estimated 12% drop in traffic for all affected pages after losing featured snippets (95% confidence level).

This chart represents the cumulative impact of the test on organic traffic. The central blue line is the best estimate of how the variant pages, with the change applied, performed compared to how we would have expected without any changes applied. The blue shaded region represents our 95% confidence interval: there is a 95% probability that the actual outcome is somewhere in this region. If this region is wholly above or below the horizontal axis, that represents a statistically significant test.

What did we learn?

Adding in the “data-nosnippet” attribute, not only were we able to stop Google from pulling data in that section of the HTML page to use as a snippet, but we were also able to confirm that we would rank again in the SERP, whether that is ranking in position one or lower.

As an additional tool, we were also tracking keywords using STAT Search Analytics. We were able to monitor changes in ranking for pages that had featured snippets, and noticed that it took about seven days or more from the time of launching the test for Google to cache the changes we made and for the featured snippets to be overtaken by another ranking page, if another page was awarded a featured snippet spot at all. The turnaround was quicker after we ended the test, though, as some of these featured snippets returned as quickly as the next day.

However, a negative aspect of running this test was that, although some pages were crawled and indexed with the most recent changes, the featured snippet did not return and has now either been officially given to competing pages or never returned at all.

To summarize the significant findings of this test:

For the vast majority of publishers winning the featured snippet likely remains the smart strategy. There are undoubtedly exceptions but as a general “best practice” if a keyword triggers a featured snippet, it’s typically in your best interest to rank for it.

What are your experiences with winning featured snippets? Let us know in the comments below.

Note: This post was co-authored by Cyrus Shepard and Rida Abidi.

Join Moz SEO Scientist, Dr. Pete Meyers, Wednesdays in April at 1:30 p.m. PT on Twitter and ask your most pressing questions about how to navigate SEO changes and challenges in a COVID-19 world. Tweet your questions all week long to @Moz using the hashtag #AskMoz.