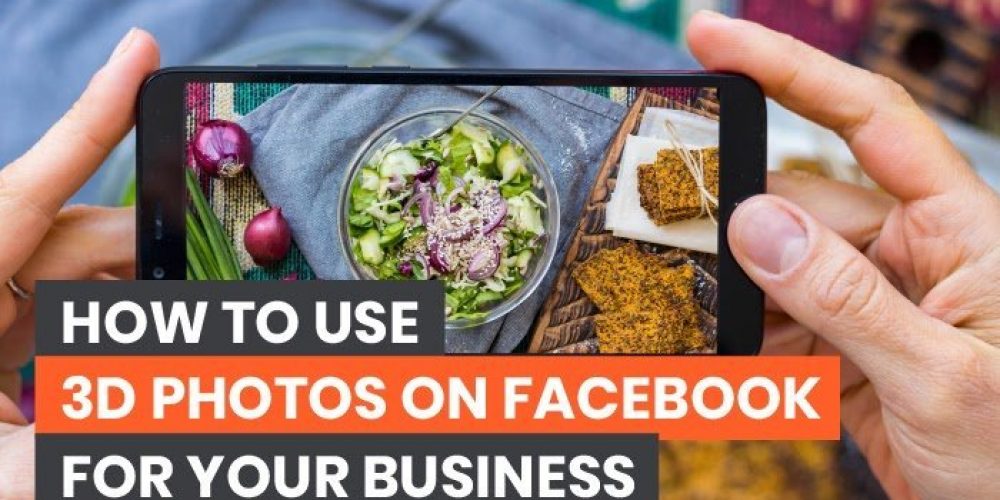 One trend that presents just such an opportunity is 3D photos on Facebook.

Partially influenced by 3D technologies and mixed reality resurgence, 3D photos can help you capture attention and tell your brand’s story on Facebook.

3D photos allow you to view an image through three dimensions instead of two, so you can see things slightly around an image that would otherwise be out of view in a standard 2D photo.

For example, in a 3D photo of a person looking into the camera, you’ll see parts of the sides of their face, and slightly above their head.

3D photos allow you to explore an image by scrolling, tilting, and panning using your mouse or trackpad.

One important note: 3D photos are not to be confused with 360-degree images. The latter allows you to explore a scene in its entirety, but requires special equipment and a unique setup, which we won’t be discussing here.

In short, a lot of funky, complex algorithms make them possible.

Developed by research scientist Johannes Kopf at Facebook, the algorithm works by analyzing the depth maps and tiny movements produced by your phone’s camera and motion detection system.

These depth maps are then processed and turned into 3D meshes, which create the final 3D photo.

Not all phones are capable of achieving this. Mid-range smartphones, such as the iPhone 7 and above, are needed to create 3D Photos.

Why Should You Care About 3D Photos on Facebook?

You may be skeptical about using 3D photos on Facebook. It may conjure images of other forms of 3D media, such as cinema or TV.

Those aren’t the best 3D media, and both of them failed to catch on. In recent years, though, artificial intelligence and augmented reality have begun to show promise.

However, 3D photos—particularly on Facebook—are a unique case.

There are a few reasons why you may want to use them for your business:

Facebook has been around for a while, which means that most brands and advertisers are already using it. More than 90 million small businesses use Facebook. As there is only a limited amount of attention span to go around, you must continuously compete to capture attention. 3D photos offer a powerful way to do this as they allow you to pattern innovatively interrupt the user’s attention.

Facebook has reduced brands’ organic reach and is instead prioritizing posts from friends and family. With fewer opportunities to wow your audience, you need ways to stand out, such as 3D photos.

Provides A New Form of Storytelling

A 2D photo can tell a story, but a 3D photo can make that story come to life. 3D photos offer new ways to connect with your customers by opening up a new channel of creative storytelling.

Brands are catching on to how effective this type of media can be on Facebook, but 3D photos haven’t been fully exhausted yet. They’re likely here to stay, and now is the perfect time to get the most out of them.

Although 3D photos can be a powerful tool for organic content, they’re currently not available to use in Facebook ads.

Facebook hasn’t stated the reasons for this, and we don’t know when or if they’ll be available to use as boosted posts.

However, it’s safe to assume that Facebook currently measures 3D photos’ performance on the platform. If they show promise and measurable user engagement, Facebook may allow advertisers to use 3D images at some point.

Like any marketing channel or technique, the results you can expect will depend on your product, industry, and customers.

If you’re offering an intangible service such as management consultancy, there may not be many creative use cases that work in your space.

However, if you’re showcasing a visual product like a designer handbag, 3D photos can be a natural extension of your marketing strategy.

Here are some industries that can benefit from 3D photos:

3D photos can help inform consumer decision-making when buying clothes and accessories. It’s often difficult to get a feel of such items online, and seeing them in 3D can help.

3D Photos can also be a natural extension of animation. They can help bring an animated character to life without having to animate.

If you’re selling a vacation destination, making the image more immersive in 3D can help the user visualize themselves being there. Scenery, ambiance, and colorful visuals in exotic locations can come to life.

Other immersive experiences, such as festivals or theatre, can use 3D photos to provide a better glimpse of what they have to offer.

Visually heavy industries can use 3D photos to their best effect. Also, industries that offer immersive experiences can use 3D images to replicate their value proposition more closely.

If you decide your business can benefit from using 3D photos on Facebook, here are the steps to post them.

Get the Right Equipment

Luckily, Facebook has made posting 3D photos accessible to everyone. You won’t need any fancy camera equipment.

All you need is a mid-range smartphone that has single or dual-lens, portrait mode capabilities. An iPhone 7 or equivalent (and above) is suitable to take 3D photos.

If you want to get the most out of 3D photos on Facebook, you must view it as part of your marketing strategy instead of a gimmick.

The concepts you come up with will require some creativity and application to your industry, but here are some general ideas:

When taking 3D photos, keep the backdrop in mind.

Typically, the Facebook 3D photo tool performs best if there is an object at the forefront. Having various other background depths also helps.

Use appropriate lighting and a contrasting backdrop, then put your camera in portrait mode.

Take the photo, and that’s it! Your phone’s camera and the Facebook algorithm will do the rest when you upload the image.

You can also turn existing photos into 3D photos. Facebook has taught their artificial intelligence (AI) to create 3D structures from 2D images, so you can upload any image you already have.

Keep in mind that although the effect can be quite convincing, the app is essentially “guessing” what the 3D image would look like. This means that there could be some blur, which you’ll need to check before publishing.

This is a pretty straightforward process:

Your 3D photo and post will then be published to your page.

To help get your brain buzzing with ideas and possibilities, take a look at how some pages are using 3d photos on Facebook:

Wayfair has created a 3D rendering to allow their customers to view and interact with their furniture before buying it.

Omnivirt created this 3D Game of Thrones image, an excellent example of how these photos can work in marketing promotions.

The character’s cinematic effects are amplified, making him come to life and almost jump out of the screen.

This Facebook video showcases the use of 3D photos in a real environment. In this way, you can turn an otherwise standard image into a more attention-grabbing media form.

3D photos on Facebook are an innovative way to help your posts stand out in a crowded news feed.

Although 3D photos may not move the needle in any significant way due to the limited reach of organic posts, they’re a useful tool in a holistic marketing campaign.

In the future, 3D photos may become one of the most effective ways to advertise on Facebook. We’ll have to wait and see what Facebook decides.

Have you used 3D photos on your brand’s Facebook page?

The post How To Use 3D Photos On Facebook For Your Business appeared first on Neil Patel.