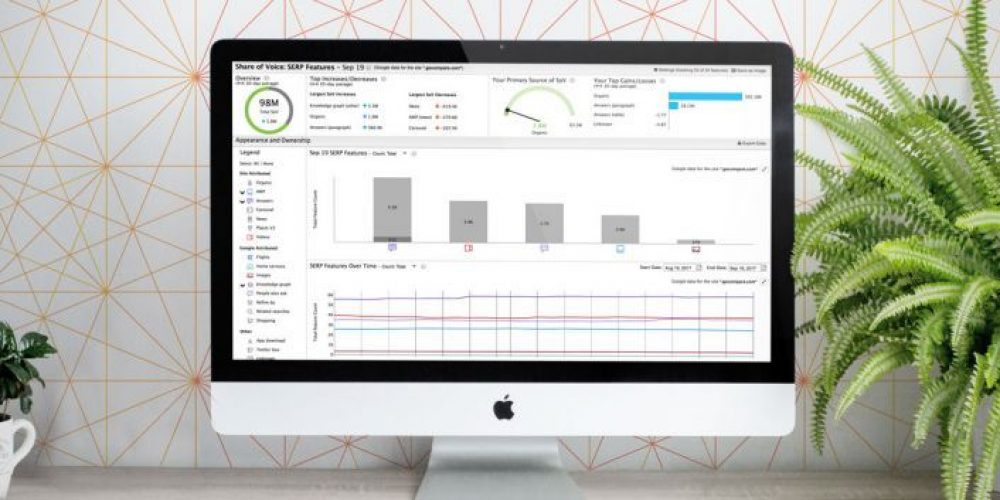 Your organic result game is on point, but you’ve been hearing a lot of chatter about SERP features and are curious if they can help grow your site’s visibility — how do you find out? Our SERP Features dashboard will be your one-stop shop for everything feature-related.

If it’s the features in your space that you’re after, you’ll have ’em. The number of keywords producing each feature? You’ll have that, too. The share of voice they’re driving and how much you’re owning? Of course, and more.

Here’s a step-by-step guide on how you can use the dashboard to suss out a SERP feature strategy that’s right for your site.

For context, let’s say that we’re working for a large supermarket chain with locations across the globe. Once in the dashboard, we’ll immediately look to the Overview module, which will give us a strong indication of whether a SERP feature strategy is viable for any of our keyword segments. We may just find that organic is the road best travelled.

Clicking through our segments, we stumble across one that’s driving a huge amount of share of voice — an estimated 309.8 million views, which is actually up by 33.4 million over the 30-day average.

At this point, regardless of what the deal is with SERP features, we know that we’re looking at a powerful set of keywords. But, because we’re on a mission, we need to know how much of that share of voice is compliments of SERP features.

Since the green section of the chart represents organic share of voice and the grey represents SERP feature share of voice, right away we can see that features are creating a huge amount of visibility. Surprisingly, even more than regular ol’ organic results.

By hovering over each segment of the chart, we can see their exact breakdowns. SERP features are driving a whopping 188.2 million eyeballs, up by 18 million over the 30-day average, while organic results are driving only 121.6 million, having also gained share of voice along the way.

We’re confident that a SERP feature strategy is worth exploring for this segment.

2. Get a lay of the SERP feature landscape

Next, we want to know what the SERP features appearing in our space are, and whether they make sense for us to tackle.

As a supermarket chain, not only do we sell fresh eats from our brick-and-mortar stores, but our site also has a regularly updated blog with delectable recipes, so we’ve got a few SERP features already in mind (can anyone say places and recipe results?).

But, if for some strange reason our SERPs are full of flights and jobs, maybe we’ll move onto a segment that we can have more impact on, and check in on this one another time.

To see what we’re working with, we head to the [Current Day] SERP Features chart, make sure every feature is enabled in the legend, and select SoV: Total from the dropdown, which will show us the total share of voice generated by each feature appearing on our SERPs.

Right away we know that the top two share of voice earners are directly in our wheelhouse: places and recipe results. What are the odds!

Carousels and knowledge graphs — features that we have little or no control over — might be next on the list, but the ones trailing them aren’t far behind and are winnable. So, we’ll pick our favourite five — places, recipes, list snippets, “People also ask” boxes, and paragraph snippets — to build strategies around, and make sure only they appear on our chart.

Since food and food-related activities tend to be heavy on the visuals, it wouldn’t be wise for us to neglect images and videos entirely, so we’ll also enable them just to creep on. (We’ll think of recipes and AMP recipes as one, and make a mental note to look into an overall AMP strategy at some point.)

Our [Current Day] SERP Features chart now shows how our chosen features stack up against each other in terms of share of voice. Apparently, videos have such a small impact that they don’t even warrant a bar on the chart.

But, before we ride off into the sunset with our SERP features just yet, we still need to do a little more research to see whether they’re a long-term relationship option or a mere flash in the pan.

To do this, we look to the SERP Features Over Time chart, take the SoV: Total metric with us, and select a date-range wide enough to give us a good idea of their past behavior. Ideally, we’d love to see that they’re making continual progress.

At the very least, they appear to have a pretty stable presence — no questionable dips to be seen — which means that we’ve got ourselves some dependable features. Cool.

3. Know how many keywords you’re working with

Now that we know which SERP features will help boost our site visibility, it’s time to see how many keywords that each feature’s strategy will revolve around.

So, back to the [Current Day] SERP Features chart we head, switching our metric to Count: Total to get the exact number of keywords that produce each result type.

This changes our view rather drastically — video and image results now take top billing. Of course, we’ll remember that despite their apparent popularity on our SERPs, they have very little sway.

As far as the result types that we care about go, “People also ask” boxes and places appear for most of our keywords, and more keywords to optimize for means more time and effort.

We’re absolutely tickled pink to see that a relatively small number of keywords are responsible for producing all that recipes share of voice — this is the feature we’ll probably want to start with.

To get these groups of keywords, we’ll simply click the SERP feature icons along the bottom of the chart and voila! We’ll see a filtered view of them appear in the Keywords tab, allowing us to create individual tags for them. This way, we can monitor them more closely.

Now we can perform some SEO magic.

As we optimize for our various SERP features, not only can we track our progress, but we can keep an eye on the general happenings of features on our SERPs.

We’ll use modules in the Share of Voice: SERP Features panel for these quick health-checks, customizing them to show only our chosen SERP features, which will make unearthing these insights even easier.

The Top Increases/Decreases module shows us that places, PAAs, and paragraph snippets have gained the most share of voice on our SERPs. The metric for each feature tells us exactly how much movement has been made between the current day and the segment’s 30-day average.

In other words, the overall health of the features we’ve put our lot in with is doing well. And snagging one of them could mean more share of voice than we’d originally anticipated.

Only videos have taken a slight hit, but since we’re not interested in them, we’ll breathe a sigh of relief and pat ourselves on the back for putting them off to the side.

We’ll keep an eye here to make sure that our features continue to trend up on the SERPs.

But how are we doing?

The Your Top Gains/Losses module tells us that our hard work is paying off for places packs. Not only has this result type grown in influence on the SERPs in general, but we’ve managed to increase our share. Woo!

And while we’ve only made a smidgen of improvement with recipes, it’s still better than the none we had before.

Unfortunately, we appear to have lost some ground with our featured snippets. Did we fall out of a few? Did they get bumped down the SERPs because of other, more relevant features? Are snippets just super volatile in our space? We’d be smart to do some investigating.

And finally, since our biggest growing SERP feature for the day isn’t necessarily what drives most of our site visibility, we’ll take a quick peek at the Your Primary Source of SoV module to see who our SERP feature superstar is.

As it happens, out of all the SERP features that we own, places are giving us the most visibility as well.

We’ll watch the needle to see if we keep making gains — we’re currently only owning an estimated 1.7 million views out of an available 60.5 million — or see whether another SERP feature appears here, usurping places as our top earner.

5. Keep track of ownership over the long-haul

Daily progress reports are great, but we’ll also need a running tally of our successes (and failures) to help us zero-in on when and why things were (or weren’t) working for us.

To do this, we’ll go to the SERP Features Over Time chart, set our metric to Count: Owned and our date-range to whenever we’re curious about, and see how the number of keywords with features that we own has been trending during that period.

Looking over our first month of optimizing — we were doing a great job of increasing our appearance in paragraph and list snippets until recently. We’ll have to look back at what we were up to on September 14 and see if we can replicate our success that day in order to dig ourselves out of our current hole.

Our spot in places results have at least held steady.

Now that you know how to explore a SERP feature strategy, what are you waiting for!

Want more info or a personalized walk-through of what you saw here? Say hello and request a demo.

What SERP feature strategies are you keen on exploring — tell us below in the comments?