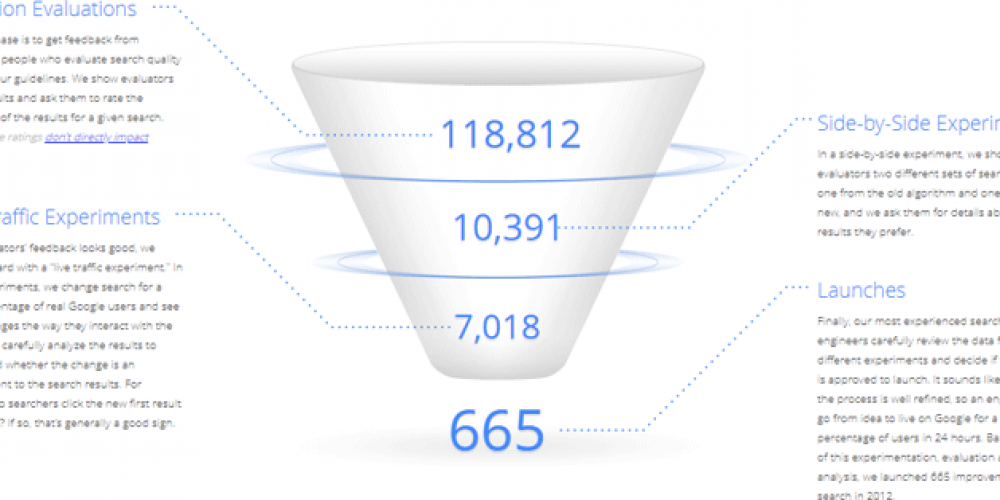 In 2018, Google reported an incredible 3,234 improvements to search. That’s more than 8 times the number of updates they reported in 2009 — less than a decade ago — and an average of almost 9 per day. How have algorithm updates evolved over the past decade, and how can we possibly keep tabs on all of them? Should we even try?

To kick this off, here’s a list of every confirmed count we have (sources at end of post):

Unfortunately, we don’t have confirmed data for 2014-2015 (if you know differently, please let me know in the comments).

A brief history of update counts

Our first peek into this data came in spring of 2010, when Google’s Matt Cutts revealed that “on average, [Google] tends to roll out 350–400 things per year.” It wasn’t an exact number, but given that SEOs at the time (and to this day) were tracking at most dozens of algorithm changes, the idea of roughly one change per day was eye-opening.

In fall of 2011, Eric Schmidt was called to testify before Congress, and revealed our first precise update count and an even more shocking scope of testing and changes:

“To give you a sense of the scale of the changes that Google considers, in 2010 we conducted 13,311 precision evaluations to see whether proposed algorithm changes improved the quality of its search results, 8,157 side-by-side experiments where it presented two sets of search results to a panel of human testers and had the evaluators rank which set of results was better, and 2,800 click evaluations to see how a small sample of real-life Google users responded to the change. Ultimately, the process resulted in 516 changes that were determined to be useful to users based on the data and, therefore, were made to Google’s algorithm.”

Later, Google would reveal similar data in an online feature called “How Search Works.” Unfortunately, some of the earlier years are only available via the Internet Archive, but here’s a screenshot from 2012:

Note that Google uses “launches” and “improvements” somewhat interchangeably. This diagram provided a fascinating peek into Google’s process, and also revealed a startling jump from 13,311 precisions evaluations (changes that were shown to human evaluators) to 118,812 in just two years.

Is the Google algorithm heating up?

Since MozCast has kept the same keyword set since almost the beginning of data collection, we’re able to make some long-term comparisons. The graph below represents five years of temperatures. Note that the system was originally tuned (in early 2012) to an average temperature of 70°F. The redder the bar, the hotter the temperature …

Click to open a high-resolution version in a new tab

You’ll notice that the temperature ranges aren’t fixed — instead, I’ve split the label into eight roughly equal buckets (i.e. they represent the same number of days). This gives us a little more sensitivity in the more common ranges.

The trend is pretty clear. The latter half of this 5-year timeframe has clearly been hotter than the first half. While warming trend is evident, though, it’s not a steady increase over time like Google’s update counts might suggest. Instead, we see a stark shift in the fall of 2016 and a very hot summer of 2017. More recently, we’ve actually seen signs of cooling. Below are the means and medians for each year (note that 2014 and 2019 are partial years):

Note that search engine rankings are naturally noisy, and our error measurements tend to be large (making day-to-day changes hard to interpret). The difference from 2015 to 2017, however, is clearly significant.

Are there really 9 updates per day?

No, there are only 8.86 – feel better? Ok, that’s probably not what you meant. Even back in 2009, Matt Cutts said something pretty interesting that seems to have been lost in the mists of time…

“We might batch [algorithm changes] up and go to a meeting once a week where we talk about 8 or 10 or 12 or 6 different things that we would want to launch, but then after those get approved … those will roll out as we can get them into production.”

In 2016, I did a study of algorithm flux that demonstrated a weekly pattern evident during clearer episodes of ranking changes. From a software engineering standpoint, this just makes sense — updates have to be approved and tend to be rolled out in batches. So, while measuring a daily average may help illustrate the rate of change, it probably has very little basis in the reality of how Google handles algorithm updates.

Do all of these algo updates matter?

Some changes are small. Many improvements are likely not even things we in the SEO industry would consider “algorithm updates” — they could be new features, for example, or UI changes.

As SERP verticals and features evolve, and new elements are added, there are also more moving parts subject to being fixed and improved. Local SEO, for example, has clearly seen an accelerated rate of change over the past 2-3 years. So, we’d naturally expect the overall rate of change to increase.

A lot of this is also in the eye of the beholder. Let’s say Google makes an update to how they handle misspelled words in Korean. For most of us in the United States, that change isn’t going to be actionable. If you’re a Korean brand trying to rank for a commonly misspelled, high-volume term, this change could be huge. Some changes also are vertical-specific, representing radical change for one industry and little or no impact outside that niche.

On the other hand, you’ll hear comments in the industry along the lines of “There are 3,000 changes per year; stop worrying about it!” To me that’s like saying “The weather changes every day; stop worrying about it!” Yes, not every weather report is interesting, but I still want to know when it’s going to snow or if there’s a tornado coming my way. Recognizing that most updates won’t affect you is fine, but it’s a fallacy to stretch that into saying that no updates matter or that SEOs shouldn’t care about algorithm changes.

Ultimately, I believe it helps to know when major changes happen, if only to understand whether rankings shifted due something we did or something Google did. It’s also clear that the rate of change has accelerated, no matter how you measure it, and there’s no evidence to suggest that Google is slowing down.